There are very few distinguishable differences between seasons in South Florida and for the most part, they blend, one into the next. The notable exception is Spring when the intensity of color is so brilliant everything comes alive with new energy and optimism.

Join me as I take a look back at March….

My end-of-month recaps have always provided an opportunity to reflect upon the things that went well and what fell short throughout the month. I always learn from both. This year I selected a WOTY (word of the year) to guide my steps with more purpose. I selected the word More because I needed a reminder that personal growth and contentment can only be achieved through intentional living. I identified what I needed more of in January when I chose the word. Since then, I have tried to keep those goals in the back of my mind. I didn’t hit the mark fully this past month, as life has its ups and downs, but I do feel good about my choices.

Getting together with new friends for a wine tasting was a highlight this past month. There is no better way to get to know people than over a few bottles of good wine and some delicious food. Malcolm and I contributed baked Ricotta cheese and his famous Flan to the table. Follow this link to the Flan recipe. It is always a crowd-pleaser.

Our friends lived in California and cultivated a taste for Pinot Noir. They treated us to three tastings – all delicious. When pressed to choose a favorite, I would have to go with the Kosta Browne. Notice the clever way the host marked our glasses on the stem so as not to confuse the wines. I am definitely stealing this idea.

Sometimes my photography hobby produces an opportunity for a ‘paying job’, and I had two this past month. The first was a formal evening in which I shot entry portraits for 45 couples. With the location pre-determined and only three shots per couple, I was done in about one hour. No brainer, but still fun.

The second was a beach, maternity shoot. It was a lot of work, as I spent about three hours with the couple in four locations (all within a quarter-mile radius). Editing took another three hours. This one I would have done for free, just for the experience. It was that much fun!

I have always delivered photographs to clients on a flash drive, but this time I used a free service called WeTransfer. It was quick and convenient and I am a forever fan. If you are in need of large file transfer capability, I highly recommend this service.

This past month I decided to check out the buzz about ‘Inventing Anna’ on Netflix. The nine-episode series is based on the true story of Anna Sorokin aka, Anna Delvey, who duped New York society and conned them out of more than $250,000. She portrayed herself as a Russian-born heiress with a ‘currently unavailable trust fund’ to gain access to power and influence. It is a remarkable story of deception and greed and I am not just talking about Anna.

I also watched the first season of ‘Outlander’, which was originally broadcast on Starz in 2014. A bad case of late-night Netflix surfing brought me to this six-season epic drama and I am somewhat regretting that I didn’t decide to pass on it. The first season has sixteen episodes. Around episode ten, I decided to do a little research to see what I was up against. There are currently nine books in the series, written by Diana Gabaldon. That’s a lot of TV time.

This series won’t appeal to everyone as it is based on historical fiction set in the Highlands of Scotland during the seventeenth century. The time-traveling heroine is torn between two worlds and two men. Nudity, explicit sex, and violence are the norms for this fast-paced drama.

I have attempted to read a book several times this month, to no avail. My attention span is currently shortened to blog reads and current events articles. The latter is mostly depressing, so good blog reads are much appreciated. I love reading blog posts that inform, educate, and uplift. Below are a few of my favorites from March.

Tennis, Pickleball, biking, and strength work in the gym have been my exercise of choice this month. The goal is to do something every day, even if I don’t want to. My motivation to exercise is as absent as my desire to read right now.

Preparing for Another Move

We’ve spent some time this month preparing to move into the apartment we have leased for the next year. This move won’t be nearly as stressful as the last one, but there are still details to be tended to. Even though this is another temporary move, we are excited about regaining our autonomy and having a place of our own. Who knows where this decision will lead us next, but the possibilities are exciting. 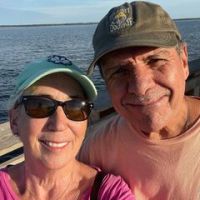 Muddling Through My Middle Age

Capturing nature's peacefulness one photo at a time.

Photos, art, and a little bit of LIT.

The World Is A Book...
Slow Shutter Speed

Teaching the art of composition for photography.

The Weekend Hedonist
Chambers on the Road

RV, other Travels and Home Life in Retirement

My site is all about my travels around the world and in Australia, plus daily life photos!

Tales, Thoughts + Tribulations of a Free Spirit in Suburbia

Having fun blogging with friends

The Joy of Slow Travel

The life of B

Mainly through the lens of a Nikon

Life is a series of transitions, and so is the retirement journey.

Living Life Your Way After 50

Retired and Enjoying Life From the Slow Lane

Every Day is a Gift!

Navigating through my post-work world